Project Description Russound RNET to Sonos Bridge (Arduino MEGA) – Part 2 by @ Overview While it was possible to use an Arduino duemilanove (Atmel 328 chipset) for this project (See Part 1), He was really limited due to the 2K of RAM. It was fun trying to optimize code to get things to run in that amount of memory, however, it caused me to not be able to expand on functionality and features. He has upgraded the project to an Arduino MEGA (Atmel 1280 chipset). This platform gives him up to 8K of RAM — which should be more than enough memory (famous last words). A lot of people have asked him to explain what exactly he’s doing with the Arduino.

It’s pretty simple. First, He’s using a RS232 shield (not shown) to capture RS232 commands from the Russound Controller. When a key is pressed on the Russound keypads He read the RS232 data and either ignore or react to the events. Currently, He’s looking for +, -, Next, Previous, Play/Pause, Menu events. He plans on using the Menu button to offer deeper content browsing menus (need to sniff the RS232 or wait for Russound to publish protocol). The + & – buttons will allow to scroll playlists and the rest of the transport buttons are self explanatory. Example RNET Next Track Event F0 0 7D 7 0 0 7F 5 2 1 0 2 1 0 E 0 0 1 7 0 1 2A F7 Since the Sonos is a uPnP based system there is no IR or way to traditionally control it.

Everything needs to be done via HTTP calls. He’s using an Ethernet Shield to translate the RS232 events to uPnP messages.

The biggest challenge has been parsing the huge amounts of VERY VERBOSE SOAP-based notification messages. He parses the data real time, looking for strings that He want to store (things like playstate and metadata).

To make matters worse, Sonos is URL encoding XML data inside of an XML structure. So writing a simple XML parser is not possible. You have to look for things like.

I’m a newbie with HA. I am trying to control my Russound CAA66 using the media player component. I am using a brainxboxes serial to Ethernet bridge.

I have previously configured to control the CAA66 using this, and it has worked fine. Based on scanning the net It does appear that the CAA66 support the RNET protocol. My config is as follows: mediaplayer: - platform: russoundrnet host: 192.168.1.72 port: 9001 name: Russound zones: 1: name: Zone 1 2: name: Zone 2 3: name: Zone 3 4: name: Zone 4 sources: name: Yamaha Receiver HA produces the following: HA doesn’t allow me to switch the zones on or off (no toggle button), nor is it reflecting the correct status of the zone when it is on. The brainboxes bridge has a couple of configuration options, which are also shown on the above image. The options for the brainboxes bridge protocol type also include “Raw TCP” and “Telnet + COM Port Contol”.

I tried both these options (restarting HA each time), and none made a difference. Any advice on what to do next to diagnose / fix the problem would be much appreciated. Thanks, Andreas.

I never got anywhere with this. I contacted the developer and he seemed to think it should just be working. He gave me instructions on how to launch the way he has his setup. I did that but it wasn’t any different, zones appear on the front end but no way to control them.

I ended up installing software called smartthings-node-proxy that works very well with my SmartThings hub. I am able to turn zones on/off, select input, and adjust volume. I don’t know if you have a SmartThings but it’s the only way I’ve found so far to have remote control over the Russound. I am all over trying to get the ST2 going.

It would be fantastic for me. The ST2-KP control pads are no longer made and despite 3 years worth of ebay crawling, I have yet to find any.

I do have a Russound ST2 'PC Power Tool' Kit with CD and RS232. Hoffsta, I have been making steady progress but still haven’t resolved it yet. I have run Neil’s russound code standalone from python and it seems ok. Will now try debug within HA. In the meantime here is a way you can test whether your serial gateway is set-up correctly.

If this works it means your serial gateway is working, and the issue is likely at HA level. Let me know what the outcome is. So I finally got this to now work from within HA. However I did need to make a code change in the HA russoundrnet component. Essentially the component does not define that the Russound supports the “TURNON” capability. As a result when HA renders the russound component on the UI, it does not provide an on button.

By changing the code to include support for turning on, the on button appears in the UI, allowing you to turn a zone one. Once the zone is turned on you can then change the volume as well as the source. So over and above any possible issues with your serial gateway (which there may be none), there is definitely an issue with the current code base within HA for the russoundrnet component. I will log this as an issue with the proposed fix. Hi - sorry for the radio silence. I have spent some time over the past couple of days making changes and improvements to get this to work. To get the code into HA there are 2 code repositories that need to be updated.

One is that built by Neil, which you were in touch with. I have submitted a pull request for him to review. I then need to also submit a pull request to the main HA repo for another change. In the meantime, what would be useful is if you would be able to help test the changes I have made. Essentially there are 2 files you need to replace in your home assistant set-up. 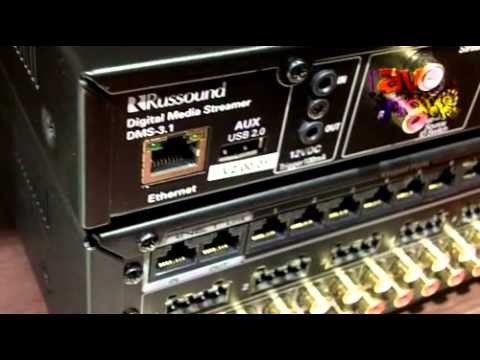 I don’t how comfortable you are with doing this. Essentially it involves navigating to specific folders (depends on what OS you are on as to where these are), and copying a file into each folder, making sure you backup the existing file you would be replacing. Let me know if you are keen and I will send you the files with more info on where to put place them.

Hi - so here you go. You can download the first file you need from here: The file name is russoundrnet.py, and it has to replace the existing file in your installation. On my raspberry pi install, the file is located here: /srv/homeassistant/homeassistantvenv/lib/python3.4/site-packages/homeassistant/components/mediaplayer Its essentially the location where homeassistant is installed. Don’t forget to back-up your existing file so you can revert if you need to. The second file you need to replace is called. You can download it from here: The location of this file is within within a folder within the same folder that your confguration.yaml file is.

The configuration of the yaml file is as before (i.e. No specific changes required).

If this works as expected, you will see your zones in the HASS UI and you will be able to switch them on, change their volume and select a source. Let me know how it goes!