Top of the 11th is when shit gets really crazy. First play is a bizarre where Jackie Bradley crashes into the wall for a triple. He’s hurt, I have only Butera on the bench and the game forces me to lose the DH and put belt in the OF (and to add insult to injury – Thornburg would lead off the bottom of the 11th). I’m cursing the game up a storm figuring the bizarre would cost me the boot here. Next play is a bizarre where a dropped third strike could have resulted in a runner reaching first; he’s thrown out but luckily the runner from third does not score. My joy is short lived though as Inciarte (again) doubles to give Nickel City a 5-3 lead that looks like 50-3 from where I’m sitting. This game is a doozy too, overshadowed by game 6 but a classic in its own right. 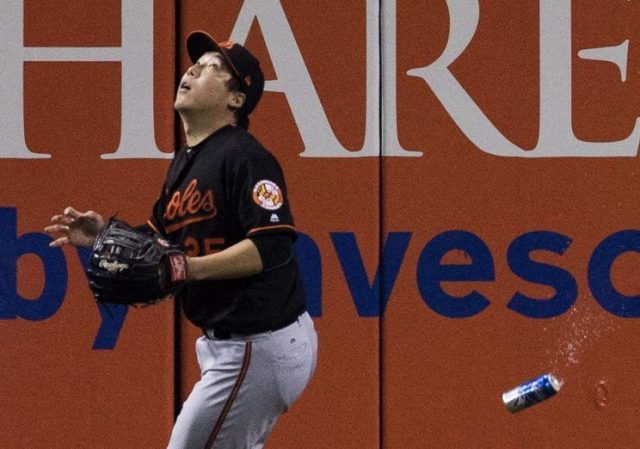 Aaron Sanchez vs John Lackey. We’re tied 2-2 going into the bottom of the 6th when Ichiro, Cain and Donaldson contribute to 2 runs being scored to give Edmonton a 4-2 lead. I should note that the rally that lead to those 2 runs was started by an “error” result to the RF, where a 0 was rolled meaning he slipped on a wet field allowing Bogaerts to reach base. I don’t know that I’ve ever seen that happen, and it happend in a key spot. Crazy but fitting for this series! The BLB playoffs are about two weeks away from beginning, so I thought I’d take a look at how the races and matchups are shaping up: Ale Edmonton (1) vs Newcastle (4) – Newcastle can still catch Narragansett for the top wildcard slot but they are 3 games back with 6 games in hand heading into the final few weeks of the season. Assuming this matchup holds it should be an entertaining first round, as Ron has played me tough all season even though I’ve taken the season series 13-5.

Of those 18 games, 11 of them were decided by 2 runs or less, and I managed to go 10-1 in those 11 games. Needless to say, it should be a close and fun series if the standings hold.

Shiner (2) vs Narragansett (3) – Narragansett is only 3.5 games back of the division and with a sweep of Cincinnati can close that gap to 2 games. These two teams face off one more time this season in the second to last series of the year that could have division title implications. So far Narragansett owns the season series 5-10, meaning that in the event of a tie in Narragansett would take the division (no one game playoff since the loser of the tie still makes the playoffs as a wild card).

Lager Ottawa (1) vs Dakota (4) / Woodbury (2) vs Nickel City (3) – Unlike in the Ale where the four playoff teams have been known for some time, the playoff teams and seeding is still up in the air in the Lager. Ottawa is a lock to win the Bock division, but could still be passed by either Woodbury or Nickel City for the #1 seed. Meanwhile, Dakota has a 7 game lead for the last wildcard spot over both Sudbury and recently hot Naptown (winners of 7 straight) with 2 series to go to catch up in games played. Dakota can do well in those 6 games and effectively lock up the wildcard, or do poorly and open the door for either team to claw their way back in. Meanwhile in the Pilsner, Woodbury owns a slim half game lead over Nickel City for the division with a series in hand (they go 1-2 in their games against Dakota and the division is tied). Woodbury and Nickel City (just like Shiner and Narragansett) play one last time this season in the schedule’s second to last series. Figured I’d throw together a predictions post of how I think the MLB season will go down, so that in October we can either a) Mock how bad these look or b) Marvel at how accurate they are.

I think “a” is faaaaaar more likely than b:). Anyway, here we go: AL East: Red Sox Blue Jays Yankees Orioles Rays Comments – I think the Red Sox are still the team to beat in the division despite David Prices’ health issues. The Jays need their starters to be good and healthy again this year to finish 2nd and contend for the wild card. AL Central: Indians Tigers Royals Twins White Sox Comments – Indians should walk all over this division. The Tigers will make some noise but the other 3 teams are on the outside looking in. AL West: Astros Mariners Rangers Angels Athletics Comments – This division will be close I think.

The Mariners are going all in on pitching and defense (especially in the OF) so it’ll be interesting to see how that plays out. Wildcards – Jays and Mariners Non-playoff team that could surprise and make the playoffs – Yankees (they have the young talent, their rotation will make or break the season for them) NL East Nationals Mets Braves Marlins Phillies Comments – Nationals should win the division though the Mets could rival them if their young SP stay healthy.

NL Central Cubs Cardinals Pirates Brewers Reds Comments – Cubs should walk away with this one though the Cards always seem to find a way to win. NL West Dodgers Giants Diamondbacks Rockies Padres Comments – I thought the Rockies were a bit of a sleeper team this year until recent injuries to Desmond, Bettis and to a lesser extent Murphy. The Dodgers are stacked and should hold off the Giants. Wildcards – Mets and Cardinals Non playoff team that could surprise and make the playoffs – Diamondbacks (they had a lot of bad/injured seasons from key players last year; simple regression alone should improve them by a lot of wins not to mention the possibility of some of their young guys taking steps forward). AL Champ – Boston NL Champ – I’ll go with a surprise pick and say Mets on the strength of their SP World Series Champ – Boston (sadly). The Edmonton Trappers visited Newcastle tonight to kick off the 2017 BLB season: Game 1 – Newcastle 4, Edmonton 0 Newcastle jumps on Rick Porcello early getting 3 runs in the first (including HRs by Posey and Davis), and Arrieta shuts the door for the 4-hit CGSO. Game 2 – Edmonton 9, Newcastle 7 Wild game 2 as Newcastle jumped out to an early lead again only for Edmonton to come back to take a 7-4 lead.

Newcastle didn’t quit though as they came back to tie it on the strength of a 2 run HR by Kendrys Morales off of Jam RP Tyler Thornburg. It stayed tied until the 11th when Edmonton got 2 runs off of Newcastle closer Dellin Betances. Chapman shut the door for his first save of the year.

Game 3 – Edmonton 2, Newcastle 1 Edmonton’s Ian Kennedy was caught scuffing the ball in the 3rd, earning an early shower and a 9 game suspension so the bullpen was strained in this one. Newcastle got a run off of Bowman and the game stayed 1-0 until the top of the 9th when Edmonton scored 2 thanks to a HR by Jackie Bradley (jam turned it into a deep drive, but 92 was rolled) and an RBI double by Schimpf.

Andrew Miller closed out the narrow series win in the bottom of the 9th. Great series to kick off the year, 3 close games. Look forward to hearing more reports about opening week games!

(3). (2). (5) Site Search Search for: Follow Blog via Email Enter your email address to follow this blog and receive notifications of new posts by email.